Assault Marines are Space Marines equipped with Jump Packs and close-combat weaponry, functioning as close quarters shock element of the Emperor's Angels of Death. Like their Chaos counterparts, the Raptors, they can serve as airborne shock troops dropping in on their enemies causing mass confusion.

The Assault class is equipped for close-quarters melee combat. Jump Packs allow these Marines to quickly close in on the enemy, dropping from the sky in their midst with a Ground Pound attack. Striking hard and fast at vulnerable points in enemy lines, this class uses speed and maneuverability to exploit enemy weaknesses.

While walking, Assault marines suffer some loss of maneuverability compared to Tactical marines. They only receive a run bonus of up to 125%, compared to the Tactical's 150%, and they have no ability to run through their opponents. What is lost in moving on the ground, is more than made up for by their jump packs. A full burn from a jump pack will keep a marine aloft for 3.2 seconds (on level ground) and improve his forward speed by up to 15.6 m/s (250% improvement over walking). At its maximal appogee this will reach a height of up to 18 meters and traverse 50 meters across a level surface. Expending the jump pack's energy across two separate burns, a marine can increase this distance to 58 meters by performing a low-altitude 'hop'. A marine may additionally trigger a Ground Pound attack, which hurtles the marine toward the ground at an astonishing 63.65 m/s.

Assaults are the only class with a loadout selection for a dedicated melee weapon, although they can only wield a pistol along it, though are also the only class with the option to wield a Plasma Pistol as a replacement for the standard Bolt Pistol . The True Grit perk, however, allows wielding a Bolter one-handed, granting higher sustained ranged damage in exchange for a perk slot. Also of note, there is a glitch that allows Assault Marines to shoot though some walls, although this does not work with the Plasma Pistol's charged shot.

Note: the Bolter can only be equipped using the True Grit perk.

You have two options here: Chainsword/Power Sword or Thunder Hammer.

If you go ether Sword then generally you are hunting ranged mobs (Shoota Boy & such) with Impenetrable and Swordsman's Zeal/Power Swordsman's Zeal. Not only are you dampening their ranged attacks, but you can often outheal their damage dealt. Round this build out with whichever Pistol & Equipment, that tickles your fancy. Also, Sword builds that use Death From Above, Blast Off, or Air-Cooled Thrusters, let you mass murder weaker groups of mobs or hop in and out of the action, at a faster rate.

If you go Hammer then Killing Blow and Sure Strike are almost mandatory, during higher waves. The improved overhead swing can stun anything, in a wide area of effect, other than 'Uge Choppa Slugga Nobs (badass black armoured Nobs), Space Marine/Chaos Champions (Badass Hammer/Maul wielding Marines) & Killa Kans (Copy & paste of a Dreadnought, although they do seem slightly weaker & have no short ranged weapon, that's normally attached beneath the melee weapon). With Killing Blow your primary goal is to hunt the bigger targets, since you will kill almost everything with no more than a single combo, although two combos are needed for a Space Marine/Chaos Champion. Also, a 'Uge Choppa Slugga Nob will not stagger or flinch, when stuck by the Hammer & a Killa Kan will take a while to take down, even with Killing Blow. Again: Pistol & Equipment, choice is up to you. 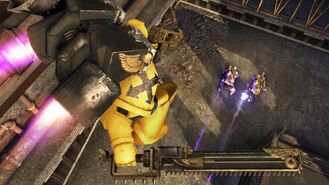 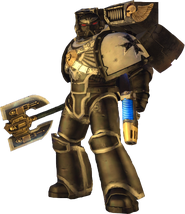 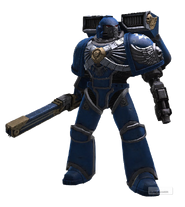 Add a photo to this gallery
Retrieved from "https://spacemarine.fandom.com/wiki/Assault?oldid=11229"
Community content is available under CC-BY-SA unless otherwise noted.