The Bolt Pistol is the standard-issue sidearm of the Space Marines. It is a compact pistol version of the Bolter, and is typically wielded alongside a Space Marine's melee weapon, typically the Chainsword.

Unlike the other ranged weapons, all Multiplayer classes can use it.

Like the Bolter, it fires small missiles, or 'bolts' (typically .75 calibre). Each self-propelled bolt contains an explosive charge that detonates once it has penetrated the target, blowing it apart from the inside. Effective against a wide variety of targets.

The Astartes Mk III Bolt Pistol is a compact, slower-firing version of the Space Marine Boltgun. Designed as a backup weapon, it nonetheless provides ample stopping power. It can kill with one headshot an enemy with no armor. A bolt round does 28 damage to shields and 40 damage to health. 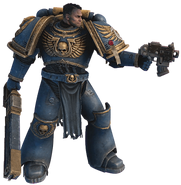 Add a photo to this gallery
Retrieved from "https://spacemarine.fandom.com/wiki/Bolt_Pistol_(Space_Marine)?oldid=11459"
Community content is available under CC-BY-SA unless otherwise noted.