The standard weapon for the superhuman warriors of the Adeptus Astartes, the bolter appears superficially similar to a modern firearm, but is actually too large and heavy for a human to wield, and fires rocket-propelled projectiles almost 20mm in caliber called "bolts". These armor-piercing bolts explode after penetrating the target, causing devastating damage far in excess of present-day small arms. However, even this destructive firepower makes the bolter a "merely" adequate weapon against the equally superhuman Chaos Marines, brutally resilient Orks, and other typical adversaries of the Astartes.

The Bolter uses a sickle magazine that holds 30 bolt rounds, with up to 330 spare rounds in reserve. Ammo stashes replenish 90 rounds each when collected.

The standard Bolter can be upgraded to the Kraken Bolter in Chapter 10, improving penetration and damage against heavily armored enemies.

It's a rapid-fire weapon, useful at range if aimed and at close quarters from the hip. Fire in short bursts, as it conserves ammunition and increases accuracy. Switch to full-auto if melee attackers close in. Elite opponents like the Slugga Nob and Chaos Space Marines often require multiple magazines to eliminate, so focus on vulnerable locations such as the target's head, and make sure to stay behind cover when reloading (for ranged elites) or be prepared switch to melee combat (for melee elites). 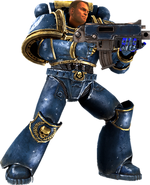 Add a photo to this gallery
Retrieved from "https://spacemarine.fandom.com/wiki/Bolter_(campaign)?oldid=10760"
Community content is available under CC-BY-SA unless otherwise noted.