Captain Titus is a Captain of the Ultramarines Chapter and the main protagonist of Warhammer 40,000: Space Marine. He is voiced by British actor Mark Strong.

Titus has been a member of the Ultramarines Chapter for more than 150 years. According to the Prima guide he is 175 years old, 7 ft 2 in (2.18 m) tall, and weighs 750 lb (340 kg). Although considered relatively young as Astartes come, he is a decorated veteran of several major campaigns and his exploits have earned him a reputation as one of the most skilled Ultramarines in recent memory.

Titus was born on the Agri-World of Tarentus in Ultramar. He was recruited by the Chapter and passed initial training, excelling at every challenge to become the best of the recruits. When he became a full Astartes and finally faced his first battle against aliens, Titus knew he had found his place in the world. Combat was as natural as breathing, and his spirit soared knowing that he was fighting a holy battle against the enemies of the Imperium.

During his youth, Titus struggled to overcome his temper. On the battlefield, giving in to anger led to close calls where only his natural fighting ability saved his neck. In time, he learned to keep his temper under control, but even today that control breaks when something blocks his ability to do what he knows needs to be done. Outside of combat, his temper shows itself in a burst of cutting words and in steamrolling over the opposition to take what he thinks is the right course of action.

As the years passed, Titus gained experience and renown both on the battlefield and off. He is a trusted comrade, and his connection to his battle brothers has grown stronger with each campaign. So many Ultramarines have fallen over the past 150 years that the relationships with his surviving comrades are even more important to the hero. As a Company Captain, the men under his command are dearer to him than his own life – if one of them is killed, Titus will not stop until the enemy responsible has paid in blood.

His closest battle brother is Veteran Sergeant Sidonus, who became an Astartes a few decades before Titus. What started as a rookie-veteran relationship soon became a fast friendship. Sidonus has seemingly seen it all, and his "been there, done that, no problem" attitude instantly serves to defuse tense situations. Titus turns to Sidonus as a common sense sounding board.

To the young Leandros, Titus is a mentor figure – a warrior who can do no wrong. Titus knows that Leandros quotes the Codex Astartes and jumps into situations with such zeal because he wants to impress his commander. Titus remembers what those first heady years as a Space Marine were like and doesn't rebuke Leandros too harshly for his enthusiasm.

Titus still mourns the recent loss of his own mentor, Captain-General Trajan, who was killed by Eldar in a routine mission gone horribly wrong. Titus held Trajan to be the ideal representation of Ultramarine nobility and honor. Now that he has inherited command of Trajan's company, Titus aspires to be the kind of leader that Trajan was.

From his first battlefield encounters, Titus became interested in the thinking behind his enemy's attack. While his Space Marine training gave him the big-picture understanding of alien strategy, Titus wanted to understand more about how small groups of enemies fight on the ground. With every battle, he experienced firsthand how differently each alien species and daemon horde fought on the ground, and gradually, patterns of tactics emerged. To better understand the enemy and their motivations gives him insight into their strengths and weaknesses and into how to exploit those weaknesses in battle. Fortunately, Captain Trajan appreciated Titus's attempts to understand their foes. His ability to predict how a group of enemies would attack saved many lives over the years. Now that he’s a Captain, Titus works to instill the same critical thinking in the men under his command.

Creatures of Chaos are among the most formidable enemies Titus has faced. In one of the darkest days in his memory, Titus and his squad went up against a Chaos Sorcerer who wielded blasts of Warp energy like malicious lightning. The energies struck down the Ultramarines one by one, until only Titus remained to face the Sorcerer.

Knowing it meant his death, Titus launched himself at the enemy, stabbing his sword deep into the Sorcerer's chest even as the Sorcerer blasted him with Warp energy. The last thing Titus felt was vengeance at seeing the Sorcerer breathe his last, and then all went dark. Titus should have died. But he didn't.

To the bewilderment of the Apothecaries, Titus healed from his severe injuries. They could not discover the reason why he survived. Although Titus understands why they must be vigilant, he still feels resentment over the fact that anyone could doubt his proven devotion to the Ultramarines.

Titus and a company of Ultramarines are sent to the Forge World of Graia to stop an Ork invasion intent on stealing Imperial weapons, including a Warlord-class Battle Titan.

Titus's gold armor trim and a vox conversation that takes place in Chapter Six with Squad Solinus (identified as a 2nd Company squad in the 5th edition Space Marines Codex) mark him as the 2nd Company Captain, which raises some timeline questions, as the current Captain of the 2nd Company is – and has been at least since 855.M41 – Captain Cato Sicarius. Since Sidonus lost his arm to Tyranids, it must be after the Hive Fleet Behemoth invasion (stopped in 745.M41), and since Sidonus has served for 225 years, it must be earlier than 970.M41. Titus mentions the Aurelian Crusade (the campaign of Dawn of War II) as already being a past event, and the splinter fleet that the Blood Ravens fought in the Aurelian Crusade was a splinter of Hive Fleet Leviathan (which first appeared in 997.M41), so Space Marine must happen after that.

While an official statement made on Relic's official Space Marine forum (now defunct) states that this game takes place in an alternate timeline to avoid questions of the canonical nature of the game's events and characters, it is not irreconcilable if the possibility that the Space Marine game takes place further into the future, after either Cato Sicarius has been slain, reassigned to another Ultramarines Company, or ascended to the position of Chapter Master. However, this would canonically require either Cato Sicarius, Marneus Calgar or another canonical Company Captain (such as First Company Captain Agemman) to have been slain, which are major canon decisions to which licensees are not privy to make. Avoidance of possible storyline conflicts was one of the major reasons behind the introduction of a new Chapter (the Blood Ravens) for all Relic's earlier Warhamer 40,000 games. 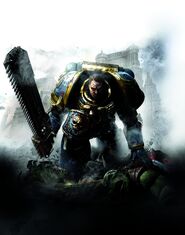 Titus inserts the Power Source into the canister 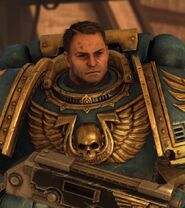 Add a photo to this gallery
Retrieved from "https://spacemarine.fandom.com/wiki/Captain_Titus?oldid=11541"
Community content is available under CC-BY-SA unless otherwise noted.