The Chainsword is a sword with a motorized chainsaw-like edge, and is the standard close-combat weapon for the Assault Space Marine class in multiplayer.

The Mk XI Hell's Teeth chainsword is the close-combat weapon of choice among Space Marines, combining terrifying power and great speed. Its silhouette is a symbol of the Imperium's greatest warriors.

The standard melee weapon for a Space Marine, with motorized monomolecular-edged teeth capable of slicing through armour, flesh, and bone. Fast and responsive, it is capable of sawing through a variety of enemies.

The chainsword has a 4 hit combo which will cause the marine to travel approximately 19 meters forward. It is the fastest of the three weapons available to the Assault Marine, but does the least damage per hit. 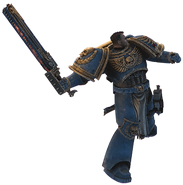 Add a photo to this gallery
Retrieved from "https://spacemarine.fandom.com/wiki/Chainsword_(Space_Marine)?oldid=11573"
Community content is available under CC-BY-SA unless otherwise noted.