Veterans of countless centuries of war, Devastators are versatile and fearsome champions for the Emperor. Like Chaos Havocs, Devastators serve as the heavy weapon support on the battlefield, wielding some of the chapter's most impressive weaponry.

With access to powerful weapons such as the Heavy Bolter, Lascannon, and Plasma Cannon, Devastators wield amazing firepower. They are most often found in holding key positions with good fields of fire to bring their weapons to bear from long range. Overwhelming firepower is what they offer at the expense of maneuverability.

Devastators are fearsome when engaged in a ranged firefight. They can lock down sections of the map with their firepower, regardless of what weapon they wield. Each of their weapons offers its own powerful alternate fire mode, such as the Plasma Cannon's charged shot with splash damage, the Heavy Bolter's braced stance with an increased rate of fire, or the Lascannon's powerful and accurate charged shot, which can bring down titans with its shot power.

Devastators suffer a huge mobility disadvantage compared with tactical marines. They lose the ability to roll through opponents, instead gaining a 6 meter 'hop'. While their walk speed, and speed while aiming remain unchanged, they only can move up to 115% speed while running. Their melee damage is a poor 30 damage kick, but the stunning stomp attack and defensive perks improves Devastator survivability enormously. Also of note, there is a glitch that allows the Devastator to shoot through some cover, just by standing next to it, although this does not work with the Plasma Cannon (both fire modes). 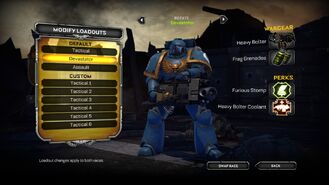 Devastator at the loadout screen. 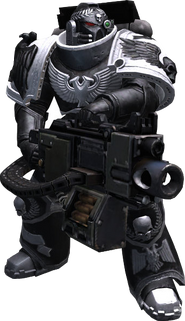 Add a photo to this gallery
Retrieved from "https://spacemarine.fandom.com/wiki/Devastator?oldid=11527"
Community content is available under CC-BY-SA unless otherwise noted.