Leandros is the most recent inductee to the Ultramarines command squad. He is a "by the book" Ultramarine, revealed by his overly formal speech and his enthusiasm to do things just right.

Leandros often speaks with little tact – to his mind, all actions must serve the Emperor, and he will question the motives of anyone he suspects of not giving their all for the Imperium. He's lost perspective on what it's like to face the world from a human standpoint, and is especially patronizing to the surviving Imperial Guard soldiers he encounters on Graia.

He looks up to battle brothers Titus and Sidonus, but especially Titus, whom he sees as the type of Ultramarine he aspires to become. He sometimes goes overboard in pursuing what he thinks is a noble course of action, because he wants to prove himself and his abilities.

His armor is a full copy of Veteran Power Armor in Online but with Aquila breastplate.

Leandros was part of Captain Titus' squad and helped cleanse the Ork invasion of Forge World Graia. After accidently helping open a chaos portal he witnessed Titus' resistance to the warp . Because of this he accused Titus of being an agent of Chaos but he was overuled by Sidonus . After Nemeroth's defeat Leandros reported Titus to the Inquisition and Titus was taken away. But before Titus scolded him saying he failed "the true test of a space marine."

Before the drop (helmeted)

Discussion with the Captain 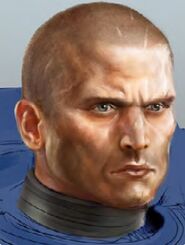 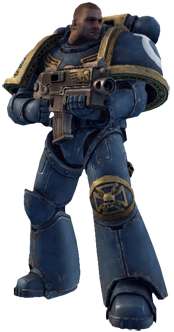