The Power Sword is an advanced close-combat weapon in Space Marine multiplayer. Unlocking this weapon requires having pre-ordered the game from the THQ Store or completing the first mission in Warhammer 40,000: Kill Team on Xbox 360 or PS3. As of Feb 7, 2012, it is available as a paid DLC item in the PC version.

The Power Sword is sheathed in an energy field that cuts through solid matter. It sacrifices some of damage potential of the Power Axe in favor of speed. In practice, it has no advantage over the Chainsword except for making less noise, which may help in sneak attacks.

This Space Marine weapon is functionally identical to the Chaos Power Sword.

The weapon of Space Marine commanders and champions, each power sword is unique. Crafted by master artificers, it stays with the recipient for life, only passing to another once the original wielder has given his life for Chapter and Emperor. 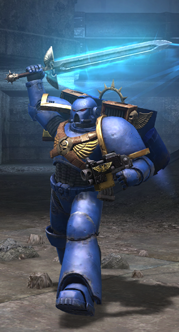 Add a photo to this gallery
Retrieved from "https://spacemarine.fandom.com/wiki/Power_Sword_(Space_Marine)?oldid=11525"
Community content is available under CC-BY-SA unless otherwise noted.