Slugga Boyz are the backbone of most Ork warbands, formed into huge mobs and armed with crude weapons. Technically, Slugga Boyz are named for the solid-shot pistols (called sluggas) they wield alongside their simple melee weapons (known as choppas), although the basic "Slugga Boyz" in Space Marine actually only carry a choppa.

These "Boyz" are the most common and typical Orks, incarnating orkish nature at its most innate level. Anarchic brutes that love nothing more than a good fight, often leaving a horrific mess of whatever they attack on the battlefield.

You'll be seeing a lot of these, and they often come in mobs. Thin them down with Bolter fire, and grenades for the larger mobs, then clean up the survivors in melee. Be careful, they can deal quite a bit of damage once in melee range. Focus on killing them, only stun and Execute if your health needs topping up.

Even the first attack in a chainsword combo will momentarily interrupt their attacks, so multiple Slugga Boyz can be taken down in melee without Titus taking any hits by rapidly switching between several Sluggas.

Their most damaging attack is a jumping charge, which is telegraphed by the Slugga raising his choppa over his head and picking up running speed before he jumps. This causes triple the damage of their normal choppa swings if it connects, but it can be interrupted by shooting the Slugga or with a very well-timed swing of your own. 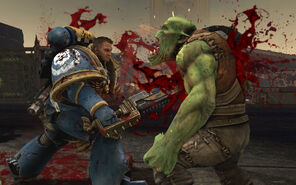 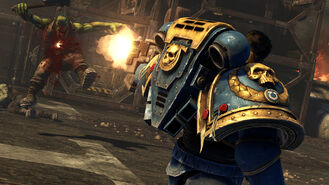 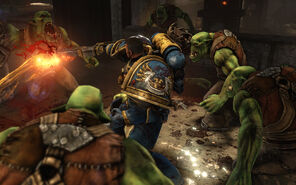 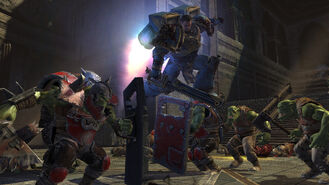 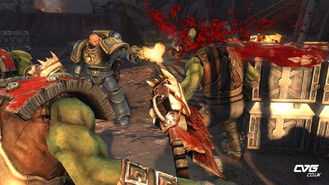 Add a photo to this gallery
Retrieved from "https://spacemarine.fandom.com/wiki/Slugga_Boy?oldid=11962"
Community content is available under CC-BY-SA unless otherwise noted.