The Stalker Bolter is a scoped long-range variant of the standard Bolter used by Space Marines.

Each bolt does 50 health damage & 40 armour damage, with a body shot. Also, this weapon is capable of longer ranged Head Shots, than most other ranged weapons, that do x2 damage to health & x3 damage to armour. Also of note, each bolt fired pass through your target(s), but not cover. This Space Marine weapon is functionally identical to the Daemon Eye Bolter.

Famously wielded by Ultramarines Scout Sergeant Telion, the Stalker Bolter is the hallmark of a Space Marine favoring precision over brute force. Depending on the specific modifications made by the wielder, the Stalker Bolter can serve as a precision battle rifle or a high-powered sniper weapon.

Despite its primary use as a weapon for engaging foes at great distances, it remains effective at shorter ranges, especially when using the Burst Fire perk.

It is not mentioned whether the Stalker Bolter in Space Marine uses the silenced Stalker rounds with the same name, though the powerful audible report would indicate that this is not the case. 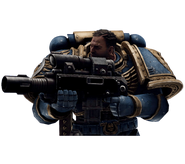 Add a photo to this gallery
Retrieved from "https://spacemarine.fandom.com/wiki/Stalker_Bolter_(multiplayer)?oldid=11444"
Community content is available under CC-BY-SA unless otherwise noted.