The Storm Bolter is a two-barreled version of the Bolter weapon, equipped with a 100-round magazine and capable of rapid fire. As it is heavier and causes more recoil than a normal boltgun, it is rarely used by ordinary human troops and is usually either pintle-mounted on a vehicle hatch, or fired one-handed by Astartes with Terminator armor. Astartes with Power Armor are able to wield it as well, but as a two-handed wepaon.

This Space Marine weapon is functionally identical to the Chaos Twin Bolter.

The Storm Bolter is a double-barreled boltgun with a damage per second output just shy of that of the much bulkier Heavy Bolter. This hail of projectiles comes at the expense of stability, limiting the weapon's effectiveness at medium or long range.

Note: although the graphical display for the storm bolter will show 2 ammo consumed and 2 bullet holes per trigger pull, in fact the weapon only fires a single shot for every 2 ammo consumed.

Additionally, where most weapons have a drop off of damage which occurs ~50meters out, the Storm bolter suffers from IMMEDIATE fall of from distance, with the minimum damage being achieved after only 15 meters from the shooter. As a result, it is perhaps better to think of this weapon as having a 'bonus' to damage when within 15 meters of an opponent. 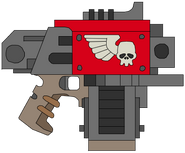 Add a photo to this gallery
Retrieved from "https://spacemarine.fandom.com/wiki/Storm_Bolter?oldid=11971"
Community content is available under CC-BY-SA unless otherwise noted.