Tactical Marines are the backbone of a Space Marine Chapter, versatile and excelling at a wide variety of battlefield roles. Armed with the Bolter or other rifle-sized weapon, the Tactical class can hunt down the enemy, take and hold territory, or hold ground with equal skill. Their counterpart is the Tactical Chaos Space Marine.

Tactical Marines are the mainstay of Space Marine forces, elite warriors functioning as versatile front line troops that bear the brunt of operations. They can wield a wide variety of weapons with great effect. The Tactical class strikes a balance between ranged combat and close combat; in order to achieve that, novice Marines of Codex-compliant Chapters initially join the 10th Company (Scout), then the 9th Company (Devastator), then the 8th Company (Assault), and only then may opt to become Tactical Marines of the 7th Company, having mastered the tactics of the two other classes.

Tactical Marines enjoy being the most agile of the three classes. In multiplayer their ground roll allows the marine to cover 8 meters quickly as well as travel through any players and NPCs. While walking the travel at 6.18 m/s, which can be increased to 150% when running, which is the fastest of all classes. By comparison walking while aiming a weapon only moves at 40% speed. Also of note, there is a glitch that allows the Tactical Marine to shoot through some cover, just by standing near it, although this does not work with the Melta Gun, Vengeance Launcher & Plasma Gun's charged shot.

Seemingly the only weapon choices, and one perk choice is Plasma Gun along with Weapon Versatility with your secondary being Melta Gun or Vengeance Launcher. With both you should barrel roll constantly, herd enemies together and melt/explode entire hordes on one go, its power is also useful against Nobz and higher. I've seen some builds use Larraman's Blessing, the other is a type of ammo perk (such as Additional Melta Fuel) since ammo is the biggest concern in Exterminatus.

Another strategy that utilizes Larraman's Blessing and the Melta gun combined with the Improved Melta Charge perk is useful for eliminating hordes using the same barrel-roll tactic and also shoulder charges when they are viable (i.e. you are recharging, out of ammo, or the enemy is weakened). The mobility of the Tactical marine is incredibely useful in protecting Devastators and corraling hordes of enemies for strikes with the Melta Gun while allies pick off the stragglers and take pot shots. 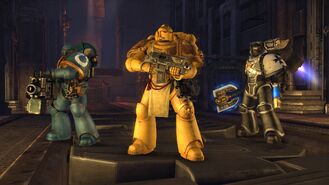 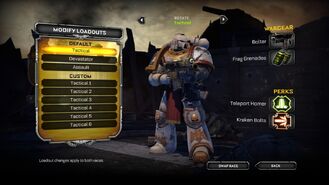 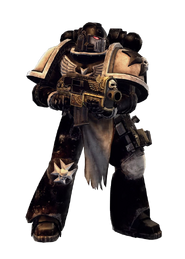 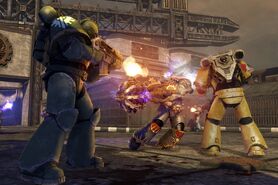 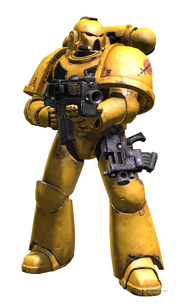 Add a photo to this gallery
Retrieved from "https://spacemarine.fandom.com/wiki/Tactical_(Space_Marine)?oldid=10993"
Community content is available under CC-BY-SA unless otherwise noted.