However, whereas most other power weapons emit a constant energy field, the thunder hammer is designed to first gather its energy, then release the collected energy into the crackling field only on the moment of impact. Combined with the warhammer's formidable physical weight and bulk, this results in a thunderous blast that obliterates even heavily armored targets.

The weapon's main drawback in combat is its relative slowness in delivering a strike, compared to most other close combat weapons.

The mighty Thunder Hammer is the rarest of Space Marine melee weapons. Each blow discharges a powerful blast from the hammer's dedicated power field.

It is an extremely powerful but slow melee weapon that builds up an immense energy charge that is released upon impact with a target and decimates everything within its area of effect; performing an Interrupt combo will result in a powerful overhead swing that creates a massive detonation, not only destroying the main target, but also damaging and staggering all nearby enemies.

Typically each direct hit from a thunder hammer does 200 damage, but a glancing blow will cause 100 damage. 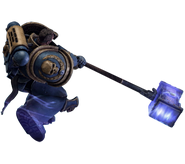 Add a photo to this gallery

Retrieved from "https://spacemarine.fandom.com/wiki/Thunder_Hammer_(multiplayer)?oldid=11921"
Community content is available under CC-BY-SA unless otherwise noted.